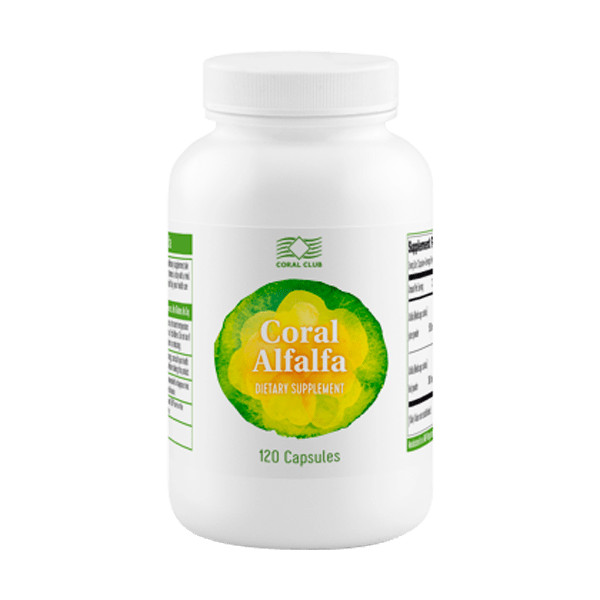 Coral Alfalfa is a wide spectrum preventive supplement. In addition to alfalfa leaves, the new product also contains a concentrated juice of the leaves, which significantly magnifies the beneficial effects. The Royal Herb has a special niche among curative herbs thanks to its wide range of positive effects from increased vitality through improved digestion and kidney function to detoxification and treatment of stomach ulcers.

How to buy Coral Alfalfa?

Coral Alfalfa is great at preventing:

Biologist Frank Bovuer established that green alfalfa leaves have eight essential amino acids none of which are produced by the human body and named the plant the great healer. Since then alfalfa has proved to be a rich source of vitamins A, K, B1, B2, B6, E, D2 and D3, minerals, especially calcium, phosphates and fluorine, saponins, isoflavones, and lots of other biologically active components. Huge amounts of vitamin K make alfalfa especially effective at stopping bleeding. So it is widely used to treat all kinds of hemorrhaging.

Alfalfa is one of the few plants that contain fluorine which helps keep the teeth healthy.

This versatile herb helps treat various conditions of the stomach, such as bloating, ulcers, lack of appetite, and a number of others as it contains the anti-ulcer vitamin U. It helps regenerate damaged mucous membrane and normalizes the acidity in the stomach. As a derivative of methionine, vitamin U normalizes lipid metabolism, binds cholesterol, and blocks its absorption; thereby preventing the development of a buildup of plaque, reducing the amount of neutral fat in the liver, and improving cerebral circulation. Vitamin U is also capable of neutralizing a number of toxins and poisons, exhibiting a marked detoxification effect. And on top of all that it helps with depression.

The high fiber content makes it useful as a mild laxative. It is also a natural analgesic and diuretic.

Take two tablets two times a day with a meal.